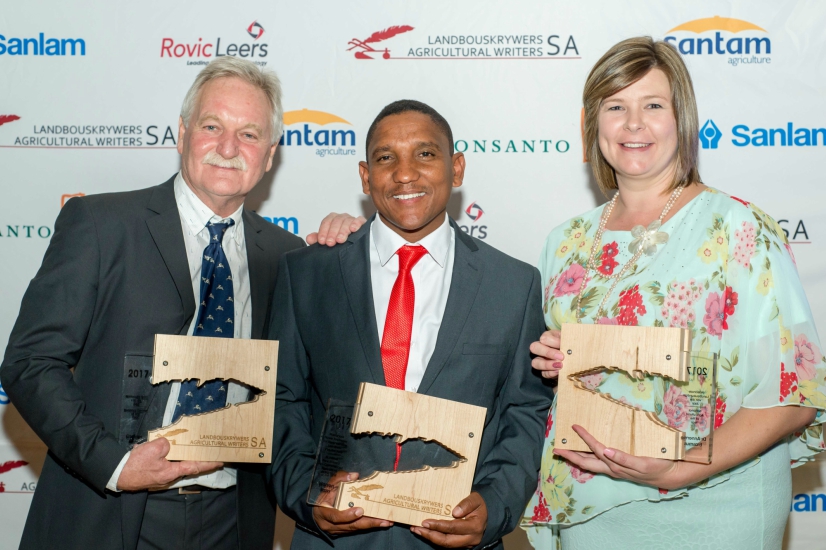 Agricultural Writers SA recently acknowledged the outstanding achievements of commercial farmers, new entrants into commercial agriculture and agriculturists, according to AgriOrbit. These awards were made in Bloemfontein on 10 November 2017 at a prestigious function sponsored by Monsanto SA, Sanlam, Santam Agriculture and Rovic Leers. One of the aims of these awards is to give prominence to the work that farmers and agriculturists do in the agricultural sector in South Africa.

The National Award recipients were:

Dr Erasmus, an entomologist at the Agricultural Research Council’s Grain Crops Institute (ARC-GCI), has vast research experience on the economically important insect pests in grain crops. Over the past 13 years she focused her work on maize stalk borers and the use of Bt-maize in integrated pest management systems. Her Master’s and PhD degrees focused on Lepidoptera species on maize. She played an important role in the fight against the fall army worm, and did groundbreaking work on the breeding of the African stalk borer (Busseola fusca) in captivity.

While agriculture was his first love, Warren studied marketing and worked in retail and construction. In 2002, his path crossed with that of an old childhood friend, Breda van Niekerk, the owner of Lushof’s son. In 2004, despite Warren’s lack of farming experience, he was appointed as farm manager at Lushof. In 2015 Bam acquired a long-term lease contract on the farm neighbouring Lushof, Gunsteling, where he started farming himself.

At first, he farmed in his free time but later started doing it fulltime when he was offered an opportunity to buy the land he had under production. In 2015, he also acquired a 26% stake in Wessel van Niekerk’s farm, Wesland. Warren has made a name for himself in the industry. In 2014, he won the deciduous fruit industry novice award as well as the Toyota New Harvest Award. Since 2016 he has been the chairman of SATI’s transformation committee and has been serving on the CPAC

Farmer of the Year 2017: Charles Back

Charles Back has built Fairview from a family farm to a brand internationally known for its wine, cheese and tourism. His series of wines, as well as his cheeses, are awarded top local and international awards every year. Charles is a man of many firsts. They were the first to import new wine grape varieties such as Viognier, Tempranillo, Tannat, Sangiovese and Petite Sirah to South Africa.

Charles was also one of the first producers to make land and company ownership a reality for farm workers. Following the collapse of sanctions, he initiated international wine marketing and sales and was the founder of the first “critter” wine brand in South Africa – an international top seller (Goats do Roam). He also established the first goat milk factory in South Africa. Charles is recognized by Carbon Protocol of South Africa for his carbon neutral factory.

All the regional winners were honoured at the event.

Agriculturist of the Year

Farmer of the Year

The association also commemorated its 40th anniversary since its establishment in 1977 when seven agricultural journalists, from three components of the media – journals, daily newspapers and electronics – assembled in Johannesburg to formally establish the Agricultural Writers Association of South Africa.

From those small beginnings, the association expanded rapidly until it reached a membership total of 140 two years later and 187 in 1985. Today, membership stands at more than 200. At its inaugural meeting on 30 March 1977, the very first clause adopted for incorporation in its constitution provided for the annual selection of a regional and national farmer and agriculturist of the year.