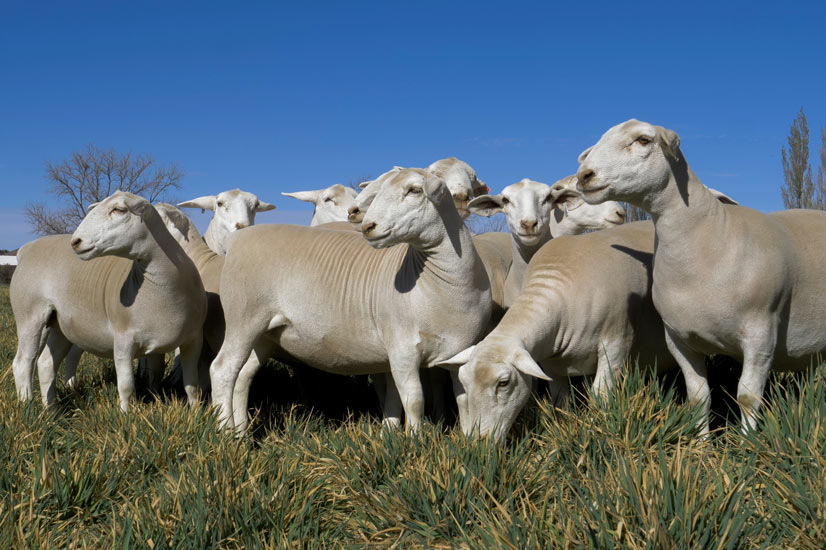 Karoo farmers are well familiar with the threat of losing their livestock to predatory animals, and one farmer, Eddie Steenkamp, has taken a step to curb these losses with an usual plan.

Steenkamp has two farms situated in the Western Cape, one near Beaufort West and one near Hopefield, where he raises his White Dorper sheep. Tired of losing his animals to the likes of caracals and jackals, Steenkamp devised a collar for his flock to attempt to keep them safe, and has reported remarkable success.

“I began in 1994 by fitting strips of used inner tube around the lambs’ necks, and later progressed to a ‘bell’ made out of a small steel tin,” Steenkamp explains.

These days, Eddie Steenkamp makes use of a successful management plan as well as two other implements, a “nail collar” and a poison collar, to protect his flock from the predatory animals.

Steenkamp warns that the strategy must be changed on a regular basis in order to ward off predators. “My system is based on the suspicious nature of predators, as well as their ability to learn new behavioural patterns very quickly through experience and observation. They have superbly developed senses of sight, smell and hearing.”

Steenkamp makes use of a “nail collar” as his main source of defense, fitting it to his lambs within three weeks after they have been born.

These collars are made up of a lightweight tin which contains a ball, secured with an adjustable strap. The ball and tin device works as a bell, while the strap also contains yellow reflectors, scent blocks and eight sharp nails.

“The sound, smell and reflectors deter prospective predators from attacking the lambs, as the predator’s senses (hearing, smell and sight) get the message that these lambs are not normal prey,” Steenkamp says, adding that predatory animals may become used to the prey and no longer see its changed state as a threat.

Once he sees that predation occurs despite the nail collar, he replaces about 20-30% of the collars with poison collars.

Since the poison in the collars, sodium monofluoroacetate, is biodegradable, they do not result in secondary poisoning, and the poson collars are replaced with the nail collars again once the threat of predation has passed.

“From 2013 to 2018, I lost an average of only 13 lambs a year. In cases where a predator actually managed to kill a lamb wearing the nail collar, it hurt itself so badly that it avoided the collars with the reflectors, and the predation did not continue.”

How to manage your flock during and after drought
September 10, 2021
Recent Posts
Archives
Go to Top
Collection of firearms in safe custody