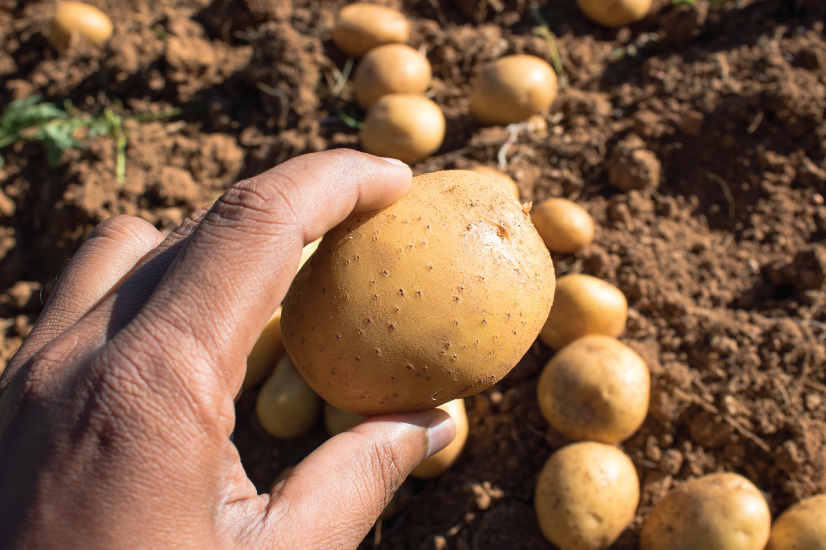 Gerhard Bruwer shares his insights on how how he plans on saving the potato industry from the many potato diseases. Gerhard and his father, Vickie Bruwer, farm together on the Genade Farm. The Bruwers produce a wide variety of foods, which include as yellow maize, waxy maize, onions and potatoes.

Gerhard says that potatoes are one of the highest rewarding crops, but it doesn’t come without risk. This is why he has diversified and created a planting rotation that works in his favour, using the land that he has previously used for potatoes for any of his other crops.

Potatoes and other crops

Potatoes do not absorb the nutrients in fertilizer very well. This means that the ground the potatoes have previously been planted in still contains nutrients from the previous season, making the soil perfect for whichever crops should be planted there next. The soil of a potato crop should stay relatively well fertilized for up to three years after harvesting the potatoes.

The Genade Farm plants three varieties of potatoes, namely the Taisiya, the Up-To-Date and the Lanorma.

Bruwer confesses that he is particularly fond of the Lanorma because it sells well as an all-rounder in the kitchen. One of the many reasons he prefers this cultivar is because of its low dry-matter content, making it excellent for potato chips. This potato cultivar also has a higher resistance to disease.

The Taisiya cultivar is an interesting one, as it makes some of the best mashed potatoes and can be considered a good potato to keep in pre-packaged packs.

The Up-To-Date cultivar is a favourite amongst the older Indian generation for its great flavour absorbing abilities, which make this cultivar perfect for curries.

Harvest and Irrigation of crops:

When irrigating for optimal usage of water, Bruwer mentions that underground probes are used to accurately measure the soil moisture, as well as the multiple methods to keep track of any mineral and vitamin deficiencies that might occur.

Potatoes are tricky crops to harvest, especially when it comes to the timing of the occurrences beyond control. Harvesting can happen at a rapid pace of about three hectares per day, after which the potatoes will go to a packhouse where they are kept in cold storage.