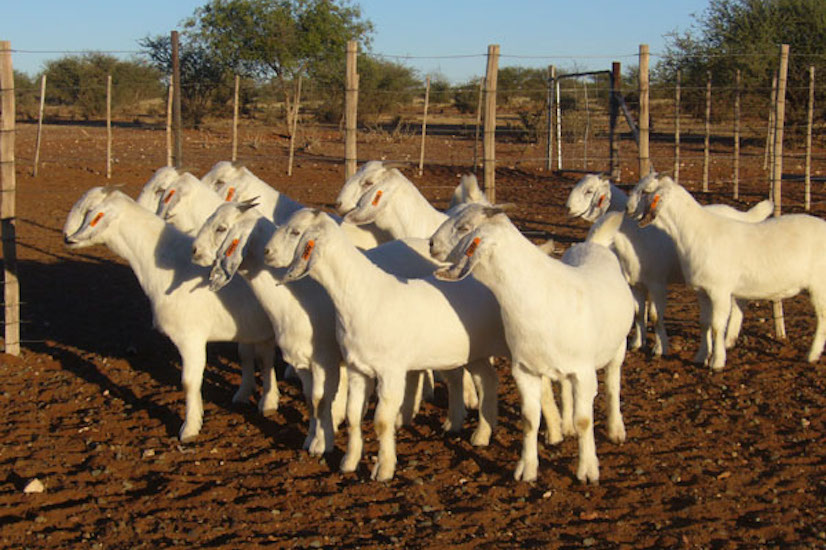 Koenie Kotzé breeds world champion Savanna goats on his farm Niekerkshoop in the Northern Cape. His method focuses on strict selection, the best possible genetics, and top conformation and type.

Kotzé’s career as a breeder started in the 1980s when he became stud manager of the DSU Cilliers and Sons Savanna Stud. He recalls that although he was highly impressed with the qualities of the Savannas, he did not have enough money to start his own flock.

Kotzé then went into an agreement with his employer to purchase some of the females with folded ears that they had wanted to cull. He also bought animals from other breeders.

“I selected top-class genetics despite the folded ears and so started the upbreeding of my own stud.”

Kotzé’s goats excel on the rugged veld of Niekerkshoop and Griekwastad, where rainfall varies widely and the temperature fluctuates from below freezing in winter to over 40°C in summer.

They have thick, pliable hides with short, white hair, and are resistant to heat and drought.

They are also fertile and easy to care for.

Although the goats have white hair, they are also selected for black pigmented hides, horns, hooves, eyelids and noses, and as little exposed hide as possible, to avoid skin cancer caused by the sun’s ultraviolet rays.

Teats and teat placement are two of the most important criteria in the selection of females; two functional teats are ideal. Kotzé also selects for well-formed and firmly attached udders.

For the rams, two reasonably large, well-formed, healthy and equal-sized testes are ideal. The scrotum must be at least 26cm in circumference, and a twisted scrotum is a cull defect.

According to Kotzé, it is crucial to select the top breeding animals. Multiple births are the norm. The ewes have a strong maternal instinct and excellent milk production.

Savannas are strong, medium-framed, functionally efficient animals. They move easily and can, if necessary, travel long distances in search of fodder and water. The ewes are aggressive and protect their kids fiercely.

The rams are masculine, robust and well-muscled.

Savannas have a fairly long, slightly curved head. The head and nose must be fairly broad and not sharp. The mouth must be reasonably wide, with muscled jaws.

His passion for functionally correct and uniform animals has been rewarded with his goats taking the honours a number of times at world championships since 2003.